Luigi's Mansion 3 is the third entry in the series, releasing for the Nintendo Switch worldwide on October 31, 2019. However, a leaked cartridge allowed Homebrew users and people buying from select retail stores to play it since October 26th, 2019.[1][2] It was revealed in the September Direct/9.13.18.

The game opens with Mario, Luigi, Princess Peach, Three of the Mushroom Kingdom's Toads , and Luigi's Polterpup heading over to a hotel called "The Last Resort ", a really tall golden skyscraper.

The owner of the Hotel, Hellen Gravely , happens to appreciate the Mario Bros. and the Princess coming over for a stay at the hotel.

As Hellen shows them to their rooms, Luigi and Polterpup head to sleep for the night, until awoken by Peach's scream.

As it turns out, Hellen Gravely, as well as all of the others, were all ghosts and the Hotel was a trap. Hellen Gravely reveals that this was her plan all along, and was actually doing this for King Boo .

Luigi has to now run away from King Boo, before he gets inside a picture frame (Note: If Luigi manages to stop at a certain point while escaping from King Boo, Luigi gets trapped in a painting and King Boo wins.)

After Luigi retrieved the Dark-Light Device (from Dark Moon) he frees E. Gadd from the painting, and escapes to the basement with Luigi. Then, E. Gadd sets up his lab in the Basement and allows Luigi to search for Mario, Peach, and the Toads.

Later, Luigi has to come back to the lab often, and acquire some things from and for E. Gadd. Luigi acquires the Virtual Boo , which is a new communication device, Gooigi (Who first appeared in the 3DS Remake of the First Game) and a Boo Tracker which traks down all of the hidden Boos on every floor of the hotel. Gooigi also helps Luigi by getting into out of reach places, or whenever Luigi needs help vacuuming ghosts.

After Luigi, Gooigi, and a slight bit of help from the Polterpup, save Mario and the others, they all head to the top of the tall building and defeat Hellen Gravely, and finally finish off King Boo. After King Boo's Defeat, the entire hotel Collapses, and everyone helps the ghosts rebuild the hotel so that the ghosts have a place to stay.

Luigi entering The Last Resort Hotel for the first time.

Luigi leaving his room in The Last Resort.

Luigi with Polterpup in the Garage of the Hotel, obtaining The Poltergust G-00.

Luigi running away from King Boo.

Gooigi using his ability to pass through a gate.

Luigi slamming a ghost against the floor with The Poltergust G-00.

Luigi and some Goobs in the restaurant area.

Hellen Gravely speaking to Luigi in her Master Suite.
Add a photo to this gallery 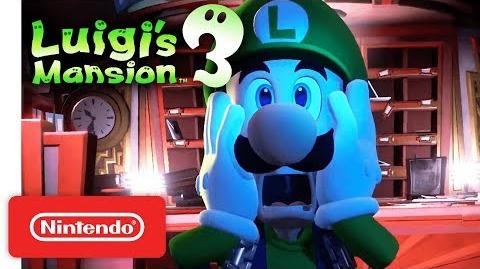 Luigi's Mansion 3 - All Bosses (No Damage)
Add a photo to this gallery
Retrieved from "https://luigi-mansion.fandom.com/wiki/Luigi%27s_Mansion_3?oldid=25481"
Community content is available under CC-BY-SA unless otherwise noted.