Polterpup is a white ghost dog that appears in Luigi's Mansion: Dark Moon, and makes a return in Luigi's Mansion 3. In story mode, he is notorious for taking special Keys that Luigi needs to progress, hence his role as a mini-boss. Polterpup may also revive Luigi when he loses all of his HP if he happens to have a Gold Bone on him. Polterpup has 50 HP every time Luigi fights him.

The Polterpup is seen at the end of level Pool Party in the Rooftop Pool of Haunted Towers. Just as Luigi gets his hand on the key to the treetop, The Polterpup snatches it from him. Luigi exclaims displeasure with the Polterpups actions, but it merely continues excitedly playing with the key, eventually throwing it out the window and then jumping out as well.

The Polterpup appears one last time in the ending cutscene. After the Dark Moon is restored, the Polterpup walks up to Luigi, feeling remorseful for its past actions. Luigi takes Polterpup in and adopts it at the end of the game. Back in Luigi's house, just as Luigi is about to go to sleep, the Polterpup jumps up onto his lap and sleeps with him.

One of the illustrations in the credits shows the five Toads and Polterpup forming a pyramid.

Polterpups make an appearance in the ScareScraper, in Polterpup and Surprise mode. Polterpups hide in kennels, but once they are revealed, they flee into other rooms. There are normal and big Polterpups, which have 50 and 100 HP respectively, and increases by five after every fifth floor.

These Polterpups also have blue collars instead of red.

The Polterpup reappears in Luigi's Mansion 3, acting as a tutorial character for Luigi early in game. The Polterpup accompanies Luigi, Mario, Princess Peach and the 3 Toads to the The Last Resort. In this game however, The Polterpup is an ally to Luigi, instead of an enemy. The Polterpup helps track down important items for Luigi and also gives Luigi hints on where to go. He also allows Luigi to access certain areas like the stage in 4F - The Great Stage and the top of the Ship in 12F - The Spectral Catch.

The Polterpup is a white, ghost pup, wearing a red collar around his neck. The Polterpup lacks ears unlike pups. In Luigi's Mansion: Dark Moon, the Polterpup has dark gray pupils.

Polterpup behaves like any normal pup. He is playful, kind and extremely loyal to his friends and allies, with his closest ally being his new owner, Luigi. When the Dark Moon was shattered, Polterpup still retained most of his normal traits, just acting quite mischievous. Once it was restored, Polterpup, alongside his fellow ghosts returned to their peaceful states. Polterpup felt remorseful for his actions, but it immediately cheered up when Luigi says, "Come here, doggy!"

During the time of the Dark Moon's absence, Polterpup was the only ghost that Luigi seemed to not fear, merely viewing him as a nuisance, getting sad when he runs off with key objects or say, "Bad doggy!"

In Luigi's Mansion 3, Polterpup still acts a little mischievous, shown when he eats a slice of cake held by Mario. He also proves himself helpful, acting as a tutorial guide for Luigi early on in the game.

Polterpup's undying loyalty shows in this game, as when Luigi was drowning in the water on B2 - Boilerworks, Polterpup managed to save his life. Luigi is also saved two more times, during and after the final battle against King Boo, saving him from being trapped by King Boo's and portrait and even from falling after The Last Resort collapses.

Polterpup also does his best to make new friends, shown with the Polterkitty, but is saddened when he is rejected by her.

Polterpup also helps Luigi, his friends and the ghosts rebuild The Last Resort.

In almost every scene showing Luigi and Polterpup, Luigi loves petting his ghost pup and even hugging him, as well as the two sleeping together.

In Luigi's Mansion 3, Polterpup also has spoken dialogue translated by his "woofs".

The design for Polterpup is very similar to Zero, from The Nightmare Before Christmas, both being ghost dogs with a red collar that look like they are covered by a white blanket, and it may have been a source of inspiration to create Polterpup.

The name "Polterpup", is a combination of the words, "Poltergeist", and "pup".

"I haven't come up with a name for this mischievous and adorable Polterpup yet. He's caused us a whole mess of trouble, but I think the playful tyke just wants someone to take him in."

"These playful canines have a strange and voracious appetite. They tend to eat objects you need, running off with them at exactly the wrong moment." 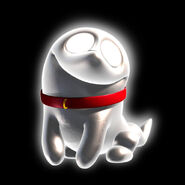 Artwork of the Polterpup in Dark Moon.

Luigi chasing Polterpup while running away from a Greenie, a Slammer and a Hider.

Polterpup, a Slammer, a Hider, a Greenie with kitchen utensils and Luigi.

Luigi with Polterpup at the end.

Polterpup guiding Luigi to the Mezzanine.

Polterpup in one of the photographs that appear in the final credits of Luigi's Mansion 3, helping with the construction of the new hotel.

Polterpup with a Gold Bone. A reference to the iconic "Lunch atop a Skyscraper" [1] photograph.

Polterpup and a Slinker helping E. Gadd with the paint job of the new hotel.
Community content is available under CC-BY-SA unless otherwise noted.
Advertisement